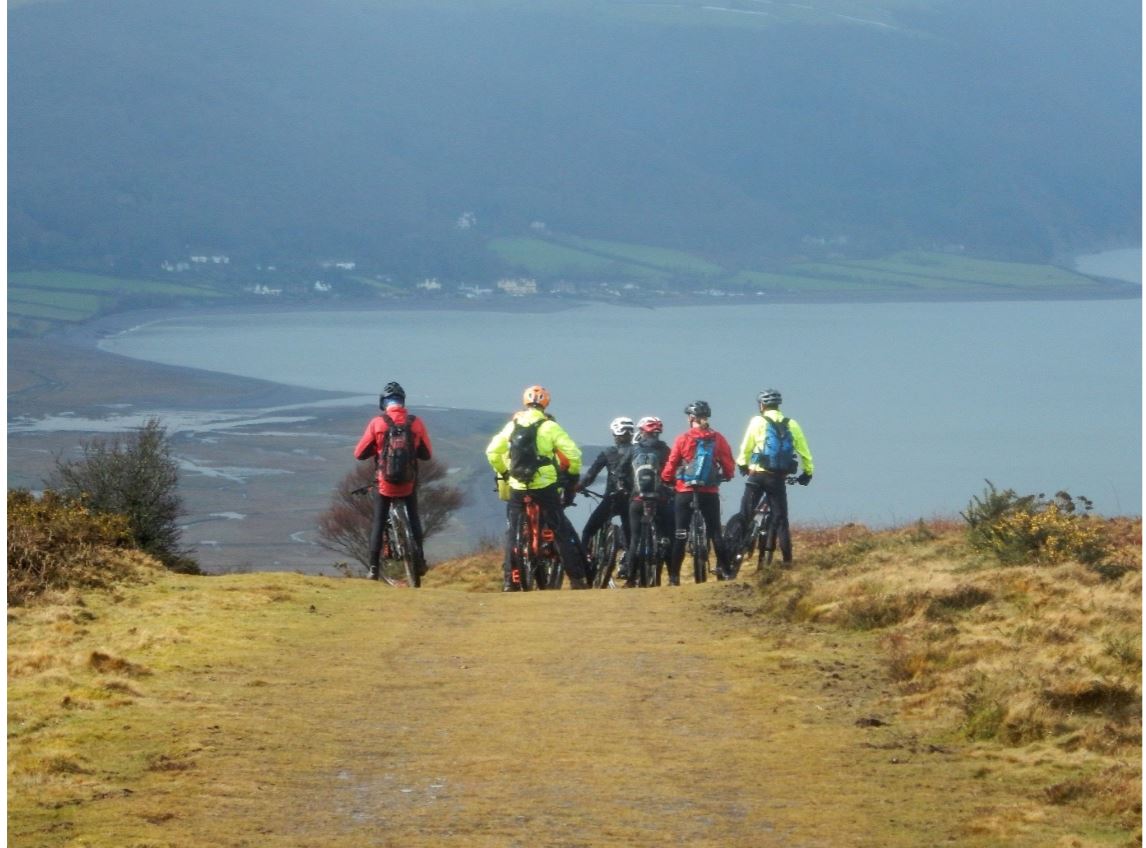 This year’s spring trip saw 11 of us descend upon the Somerset seaside town of Minehead, just a week after the Beast from the East had wreaked its winter havoc on this part of the country.

Saturday proved to be an epic day of riding, with 3700ft of climbing in just under 25 miles…phew! The day got off to a tough start, climbing steeply from the coast, getting our heart rates pounding and lungs working hard. This was to set the scene for the rest of the day. The resulting ride above the cliff tops from here was sublime, with fantastic sea views, snow filled tracks (which providing soft landings for a couple of tumbles) and a rainbow to mark the highest point on Selworthy Beacon. The singletrack descent to Lynch was worth every penny of the effort spent and the Post Office tearoom in Allerford was fantastic! Superb hospitality to a bunch of muddy bikers – so much so, we didn’t want to leave (especially as it was raining!). However, leave we did and were rewarded with another climb, another great downhill to Homer Water and then the long climb to Dunkery Beacon. The descent from here was the highlight of the day for many of us – it just kept going on-and-on, but before too long, our tired legs wound back into Minehead. Saturday evening saw us invade the Taj Mahal Indian restaurant in the town for some lovely grub, before retiring to our lodgings at the Base Lodge bunkhouse (which was also great).

Sunday morning and we lost Arwel due to car problems, but the rest of us drove over to Holford for a ride in the Quantocks. This was a much more relaxed ride, covering only 8 miles and climbing 850ft – it was needed after yesterday’s efforts! Our riding started in the woods and followed a stream, which we crossed several times. A steep (but mercifully short) climb led us up onto the Quantocks ridge, where there was some posing by our lady members at the Dead Woman’s Ditch sign! The ridge itself provided some more brilliant riding and the descent back to Holford marked a fabulous way to end the weekend (well, apart from the post ride pint in the Plough Inn). 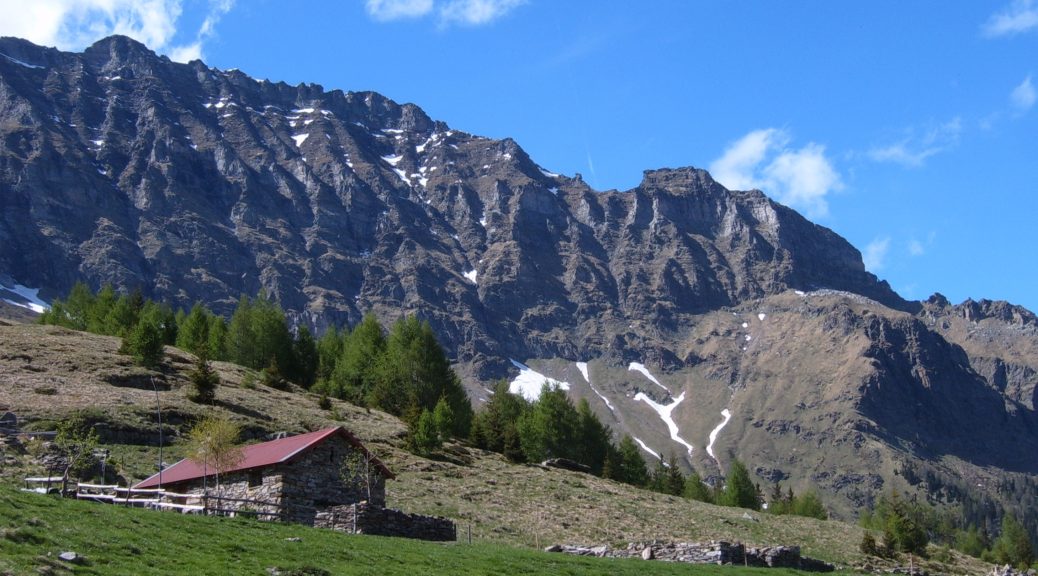 A year’s worth of weather, but not in the right order!
Back in “sunny” August, John & Elspeth Harding, Bob & Trish Hammett and myself walked another section of the GR5
footpath (which goes from Amsterdam to Nice, although the best section is from Lake Geneva to Nice). As we only had
one week, we chose to start in Les Houches (near Chamonix) and walked south to Landry, over three and a half days,
about 45 miles across the Alps.
The weather forecast for the week was not encouraging, with rain predicted for most of time we would be walking. Bob,
Trish and I took the train to Les Houches, whilst John and Elspeth flew. The train trip took 12 hours and six trains, a
leisurely and enjoyable journey, but flying is a lot faster and possibly cheaper!
Spring. The first day’s walk was from Les Houches, up over a ridge into the Les Contamines valley, to the Chalet
Refuge de Nant Borrant at the end of the valley (15 miles). As predicted in the morning the weather was wet as we set
off, full waterproofs needed. On the descent into Les Contamines we stopped in an auberge for a warming coffee. By the
time we had reached Les Contamines the sun was coming out, time to pack away the waterproofs, which happened to
involve a beer stop too. Then on up the valley to the overnight stop. Here more beer was needed to rehydrate and an excellent
set menu dinner was provided.
Winter. Day two continued up the valley, over the Col de Croix Bonhomme (8000 ft) and on to the Refuge Plan de la
Laie, on the road over the Cormet de Rosland (12.5 miles). As we left the refuge, again the weather was poor although
not raining. We set off with t-shirt and shorts on, which was sufficient as the path was upwards. Taking the only opportunity
before lunch we stopped at the next refuge for a coffee, where other walkers on the way down said that it was snowing
at the top. As we climbed higher rain started, which gradually turned to sleet and long before we reached the top we
were in a full blown blizzard. Needless to say the waterproofs had been put on when the rain had started. At the col it
was hard to stand up in the wind, the snow as thick on the ground and in the air. On the far side of the col was a refuge
where we stopped for lunch and a beer. It was a welcome place to warm up and swap stories with fellow walkers. It is
shortly after here that the paths for the GR5 and the Tour du Mont Blanc part company. As the weather was so bad we
were not able to take the proper route across the Crete des Grittes, a fine ridge walk, but had to take track down to the
road and follow the road to the overnight stop. A miserable walk in heavy rain. This refuge was a big contrast to the previous
night, very basic (no mains electricity, only cold showers), but it was dry and had beer!
Autumn. Day three dawned cold and sunny. Fantastic! Today’s route took us past the Lac de Rosland, over the Col e
Bresson (9000 ft), a beautiful valley to the village of Vezelan, where we had a hotel booked (13 miles). Today was summer,
warm and sunny all day. A gorgeous day’s walk through great mountain scenery, which, after a picnic near the col,
included a beer stop in the afternoon further down the valley. The Auberge Le Vezelan was the only hotel in the village,
served a good dinner, had hot showers and a good supply of beer. A good stop in all!
Summer. The last day was a short one, only 5 miles, down to Landry, summer was at its height now, hot sun at last.
Here we had arranged for a taxi to take us back to Les Houches. The following day I travelled home, the remaining party
had a couple of days to enjoy Chamonix before travelling home.
The rest of the GR5 to the Med will be completed in coming episodes, to follow in the years ahead….!

A damp weekend in early October and 9 mountain bikers (and 2 who joined to walk) had met up at Raven Crag to explore some of the fantastic trails that the Lakes has to offer.

After the usual beer fuelled discussions in the Old Dungeon Ghyll on the Friday night, a plan had been hatched and the group reconvened in Borrowdale on Saturday morning with the aim of riding a loop around the valley. The day started with a warm up road climb to Watendlath and a tremendous rocky plummet back down into Borrowdale before tea and cakes in Rosthwaite. This was to provide some well needed fuel for the second climb of the day, a wet and tough climb up most of Honister Pass (some of us went further up the Pass than the rest – Shaun!) and another descent back to the valley. The rocky ground proved too much for several tyres, with punctures galore, some proving terminal for the day.

After a bonus extra climb (did anyone see the turn we should have taken???), we gained a superb track around the back of Castle Crag and another steep rocky descent into Grange for more tea and cakes! Another couple of retirees here saw our group reduced to 5 and we rode the beautifully scenic track around the flanks of Catbells before descending to Keswick and returning into Borrowdale to collect the cars.

Next day, we rode a loop around Blawith Common near the southern end of Coniston Water and were blessed with some lovely sunny weather. Although shorter distances and climbs than yesterday, we still enjoyed some great biking. The views of the Coniston Fells were stunning and the grassy climbs challenging, but were made up by the 3 great descents.